A 64 years old Mr. Cinthol Samuel was living a bachelor life because his family left him to be alone. In the beginning stage it was hard for him to live without the family but as the days went by he encouraged himself to be braved person to live a happy single life. During the day he would purchase snacks from the wholesale market and go around selling on the streets by foot. With his hard labor work, he earned decent money to live a happy independent life. Little by little, he started saving money with the shopkeeper; one fine day came where the shopkeeper cheated him completely. 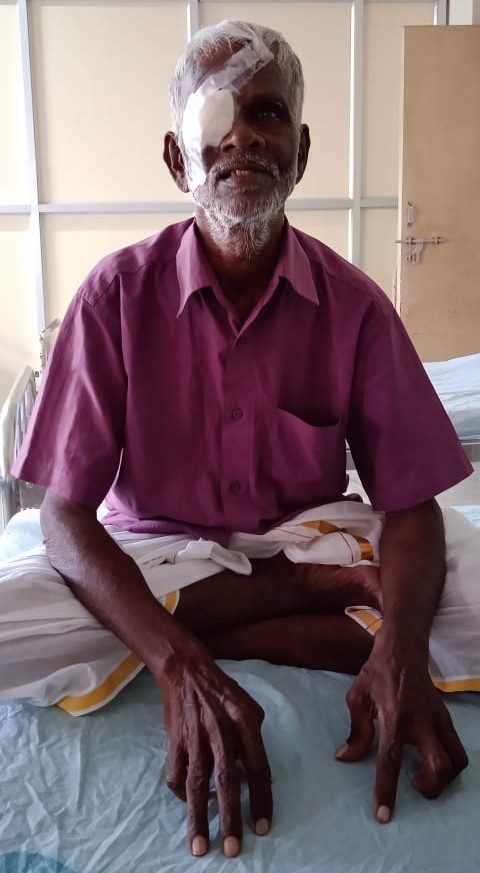 During Covid-19, he became unemployed for several months; poverty hit him hard, he could not pay rent for his little room again he is back on the streets with empty pockets.

Survival on the streets

He would sit under the tree along with other beggars for his survival. He would get two-time food and some coins for his expenses. In the initial stage, he would feel uncomfortable because all his life he worked for his bread. As the days passed by his eyesight became dull. He really struggled with his daily functional needs. During the night local boys would come and take the little that he has with him, if he refuses to give, these boys would beat him or break his head.

Mr.Salim, a compassionate person, who comes every day to give him food decided to support him for Samuel’s eye operation, then met Snehan founder Mr. Anumuthu to help him for operation. Snehan staff had taken him to hospital got him operated, now he can see with one eye as before. Very special thanks to our Government Hospital Doctors for their life-saving work.

This website uses cookies to improve your experience while you navigate through the website. Out of these, the cookies that are categorized as necessary are stored on your browser as they are essential for the working of basic functionalities of the website. We also use third-party cookies that help us analyze and understand how you use this website. These cookies will be stored in your browser only with your consent. You also have the option to opt-out of these cookies. But opting out of some of these cookies may affect your browsing experience.
Necessary Always Enabled

Performance cookies are used to understand and analyze the key performance indexes of the website which helps in delivering a better user experience for the visitors.

Analytical cookies are used to understand how visitors interact with the website. These cookies help provide information on metrics the number of visitors, bounce rate, traffic source, etc.

Advertisement cookies are used to provide visitors with relevant ads and marketing campaigns. These cookies track visitors across websites and collect information to provide customized ads.

Other uncategorized cookies are those that are being analyzed and have not been classified into a category as yet.